The Bay had a lot of outstanding — and criminally forgotten — athletes in the Suburban Conference era.  Joe Kiehm was in the Bays 13th graduating class in 1946 and was one of the Bays most accomplished athletes to that time.  And it’s not like there have been many, if any, Bay athletes better than him in the subsequent 75 years.

This senior caption from the 1946 Tower says it all about Joe Kiehm as a person and as an athlete.

Joe was a great football player, great track athlete and played on some great basketball teams, as well.

Joe entered the Bay in September, 1942, when a lot of difficult stuff was going on all over the world.  And some small slice of it in Whitefish Bay, where the Bay freshmen football team was not very good, judging by its 1-6-1 record, featuring shutouts in all of the losses and 23 total points scored.  (Hint:  things get better.)

There were no State Track Meets in 1943 and 1944, but State track team and individual titles were awarded by the WIAA based on compiled Sectional results.  They absolutely count.  Joe won the State title in the 100 as a freshman.

Joe started as a sophomore on the football team in 1943 and made an immediate impression.

The Bay had a decent season, finishing T4 in the Suburban with a 3-3 record.  That was the 11th and final season under head coach Walter Byers.  He had a 21-47-7 record with one winning season (4-3 in 1934) and I’m surprised his record is that good.  He started the program from scratch and just about all of the Suburban schools were much larger during those years.

At the 1944 Suburban, Joe had a much anticipated showdown with Shorewood senior Ralph Welton, who had an outstanding career with the Greyhounds and was the best track athlete in the state.  Welton’s 23-7 in the Broad Jump at the Sectionals the week before the Suburban held up as the State record until 1965.  He was also a 9.9 100 sprinter.

Let’s quickly get past the order of the universe being altered by the Bay not winning the meet and focus on other things. 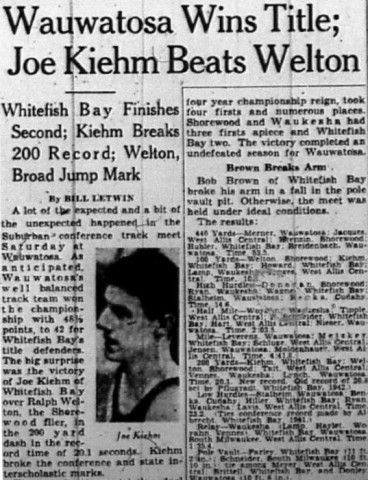 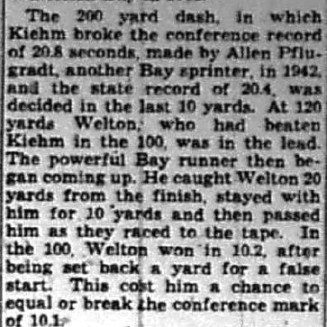 The 1944 football season was much anticipated by the Bay.  They had a deep, experienced senior class led by guard Vic Girolami and halfback Bob Hubler, with junior fullback Joe Kiehm lending support.

The Bay lost to Shorewood early in the season, 13-7 while playing badly, it sucked.  Then, the Greyhounds stumbled and lost a couple of games.  So the last game of the season featured 4-1 Waukesha playing at 4-1 Whitefish Bay for all the marbles, the all-important Suburban title.  This would be the Bays first Suburban football title if they could pull out the win.  This was a big deal.

4,500 attended the game at the Bay on the night of Friday, November 10, 1944.  The hometown fans were not disappointed.  This is truly great stuff.  One of the great days in Whitefish Bay sports history.  Winning the first Suburban football title is as good as it gets. 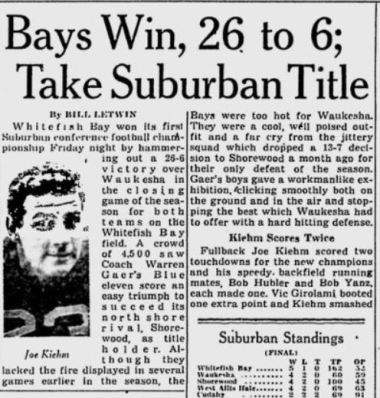 Hubler then went on to win the Suburban 200 Yard Low Hurdles in a record time of 23.1.  That’s a hell of a senior year.  Hubler was simply an outstanding athlete and one of the best in Bay history. 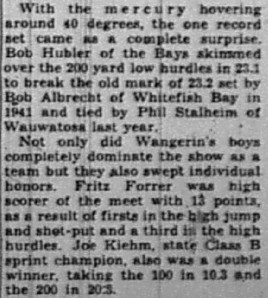 Back to Kiehm.  I’m not going to lie, I have no idea what he contributed in basketball in the 1944-1945 season.  He was in the box scores and my guess is some discipline was enforced while he was on the court.

The Bay returned just four lettermen for the 1945 football season.  It helped immensely that one of them was Joe Kiehm.  The Bay went 6-2 and finished 3rd in the Suburban, losing close games to the two teams that finished above them.

Going into the 12th Glory Cup game the Bay was just 3-8 in the series and was sporting a five game losing streak.  The game at Shorewood did not start out well, with Shorewood leading 7-0 at the half.

So when the chips were down against Shorewood, Kiehm rattled off late TD runs of 30, 11 and 69 yards to bring the Glory Cup back home where it belonged.

All I know about the top left picture is that’s the Glory Cup.  My guess is that’s a Shorewood guy handing it to the Bay.  Glory Cup banquets were held back then, with the Bay and Shorewood teams and fans attending.  I also know that’s Bay junior Jim Mitchell (another ridiculously superb 1940’s Bay athlete, overall State High Hurdle record-holder, great football player, nobody seems to have heard of him, etc.) and Joe Kiehm. 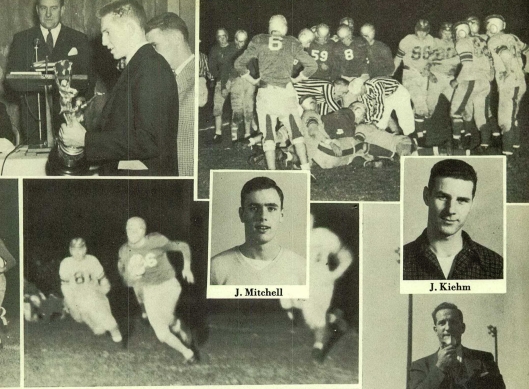 Joe averaged 8.7 yards from scrimmage in 1945 and was named All-State.  Seems deserved to me.

Joe was one of two players who didn’t attend the Football All-State banquet in Madison in early January, 1946 since he had a basketball game to play that night.

After that the rest of Joe’s Bay career is a blank.  He appears to have gotten hurt during the basketball season and then never competed during track, except for trying to run during the Sectionals and his injury didn’t allow him to finish the race.

That leaves Kiehm with five individual State track titles, four Suburban track titles, a key role on a Suburban championship basketball team, two First-Team All-Suburban nods in football, as well as playing a key role on the first Bay team to win the Suburban Conference football championship.  And it doesn’t seem as if anybody has heard of the guy.  The Bay has been totally negligent in remembering and honoring athletes from the early years.

Joe went to Northwestern and as a freshman in 1946 scored a touchdown on a 58 yard scamper in the Wildcats’ unfortunate 41-6 thrashing of the Badgers.

Joe transferred to Marquette after his freshman year.  I don’t know anything about his career with the Hilltoppers, but there is this awesome photo. 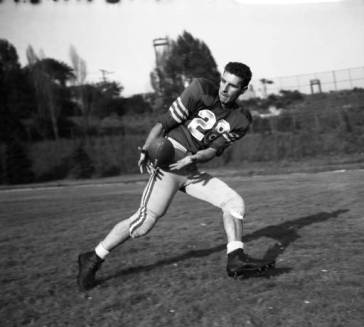 Joe served in the Armed Forces from September, 1950 to September, 1952.  Presumably in Korea, but I don’t know that for sure.  In 1955 he was living on Lake Dr. in Fox Point with his wife Janice and was working as an engineer for Globe Union, a huge Milwaukee employer in that era.  At some point, Joe and his family moved to Grafton.  Joe passed away from cancer in 1975 at age 48.  His two daughters were college-age.  Services were at St. Monica Catholic Church in Whitefish Bay.  The house Joe grew up in at 5701 N. Shoreland is across the street from St. Monica,

Joe’s younger brother Louis (class of 1947) was also a great football player and was a two-time 2nd Team All-Suburban selection as a lineman.

Here is Bob Hubler’s obituary.  While it’s unfortunate that the obituary exists, it’s nice that it gives a lot of information on Bob’s life.

Joe Kiehm and Bob Hubler are two of the greatest athletes in Whitefish Bay High School history.  If only there was some sort of organization set up with the purpose and follow-through of honoring the truly outstanding Bay athletes like them.

4 thoughts on “Joe Kiehm: “But All Fury Broke Loose””