Bob McCahill, class of 1938, was one of the great Bay athletes of the early years.  Bob was at minimum a nine-time letterman, earning three each in football, basketball and track.  He was All-Suburban in football as a senior and in the fourth Glory Cup game scored the winning PAT on a line plunge, 7-6 Bays.  In track, he was a key member of the 1937 Bay team that was the first to win a State title, winning the Shot Put and placing fourth in the Discus at Camp Randall.  His two wins at State as a senior in 1938 enabled the Bay to pull out a close one, 22 to 18 over Shawano and South Milwaukee.  His Class B Shot Put record was not broken until 1945. 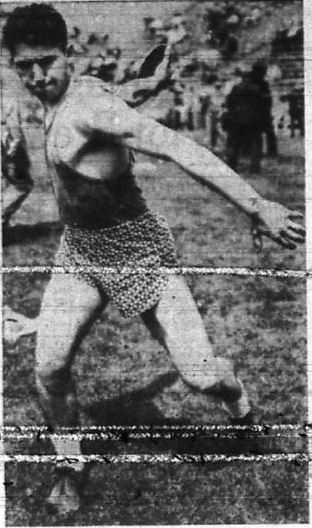 After his graduation from the Bay, Bob’s parents moved to Pittsburgh, PA, while Bob stayed in Milwaukee to attend Marquette University.  He was a multi-year starter in football for the Hilltoppers and played a key role in what is arguably Marquette’s greatest ever football win:  a 28-7 thrashing at Camp Randall in 1941 of a heavily favored Wisconsin squad that featured Pat Harder and Dave Schreiner.  He also won three track letters at Marquette. 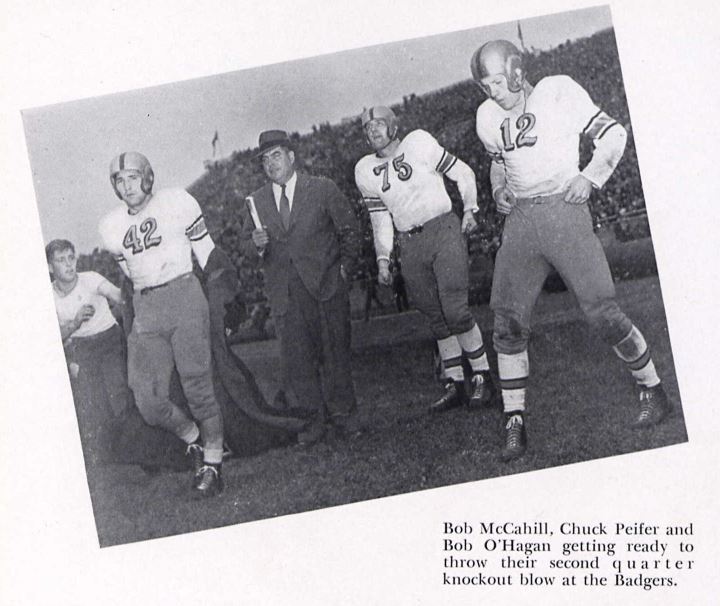 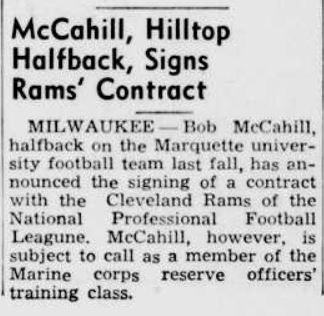 Graduation from Marquette in June, 1942:

He enlisted in the Marine Corps immediately after graduation, attended Marine Corps Officer Candidate School in Quantico, VA and later trained as a Parachute Specialist.

Bob was stationed in the Pacific Theater from March, 1943 to February, 1944 and saw significant action in the Solomon Islands campaign, particularly in the Battle  of Hellzapoppin Ridge on Bougainville Island, Papua New Guinea, in mid-December, 1943.

He was then re-assigned stateside for six months before again being stationed in the Pacific Theater with the 27th Marine Regiment.  While stateside, he married fellow Marquette graduate Nancy Van Roo on March 21, 1944 at St. Monica’s Catholic Church in Whitefish Bay.

Bob was part of the first wave of the Iwo Jima invasion force and died on February 20, 1945 in the battle for control of Airfield No. 1 (South Field), a critical first day objective.  He was buried at sea. 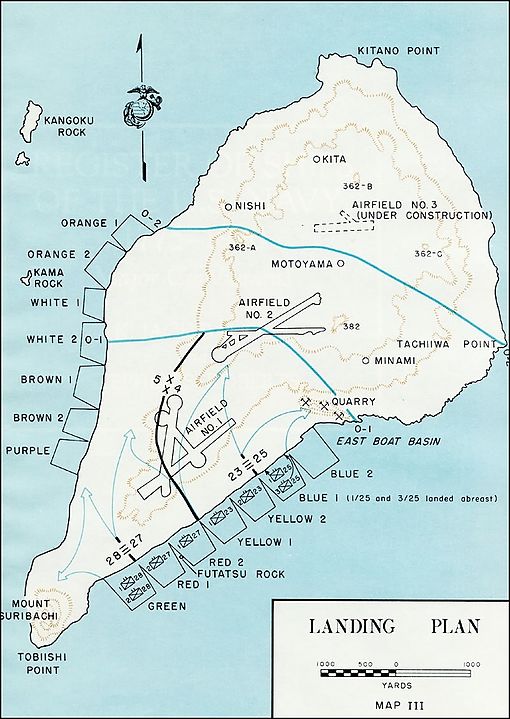 His name is listed on the Courts of the Missing at National Memorial Cemetery of the Pacific in Honolulu, HI.

Bob’s parents established the Robert L. McCahill Award at Marquette in 1946.  After Bob’s older brother Bill passed away in 1999, the award was renamed by the McCahill family to also honor Bill.  The McCahill Award is a big deal in the Marquette athletic community.

Bill McCahill was in the first Bay graduating class in 1934 and had also been an outstanding athlete at Marquette, serving as captain of the track team in 1938.  Bill received BS and MS degrees in Journalism from Marquette and was the editor of the Marquette Tribune.  He then became the night editor for the Associated Press in Milwaukee before joining the Marine Corps at the start of WWII.  During the war he served on the staff of Admiral Chester Nimitz, Commander In Chief, U.S. Pacific Fleet.  Bill coordinated the activities of war correspondents throughout the Pacific Theater.

Bill was the author of First to Fight, a history of the Marine Corps and the editor of Hit the Beach! Your Marine Corps in Action and History of the Marine Corps Reserve.  In 1947 he was appointed by President Truman to be the director of The President’s Committee on Employment of the Handicapped and served in that capacity on that and successor agencies for 27 years.  The committee became a necessary and important advocate for veterans of World War II, the Korean War and the Vietnam War.

In addition, Bill was the first of eight members of the McCahill family to graduate from Marquette.

The following picture and description appears in Hit the Beach! regarding Bob’s experience on Hellzapoppin Ridge in 1943.  There is nothing I can add to this. 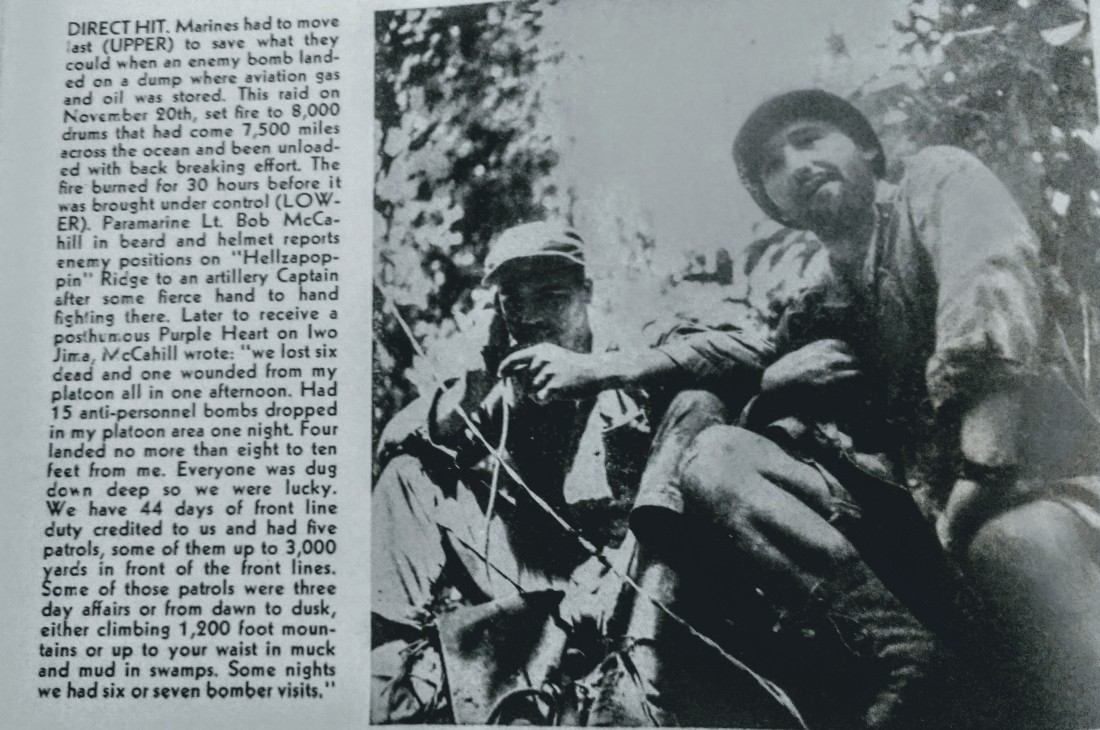 Did you ever stop to read the plaque that’s in the corridor outside the Memorial Gym?  If so, you’re one up on me. 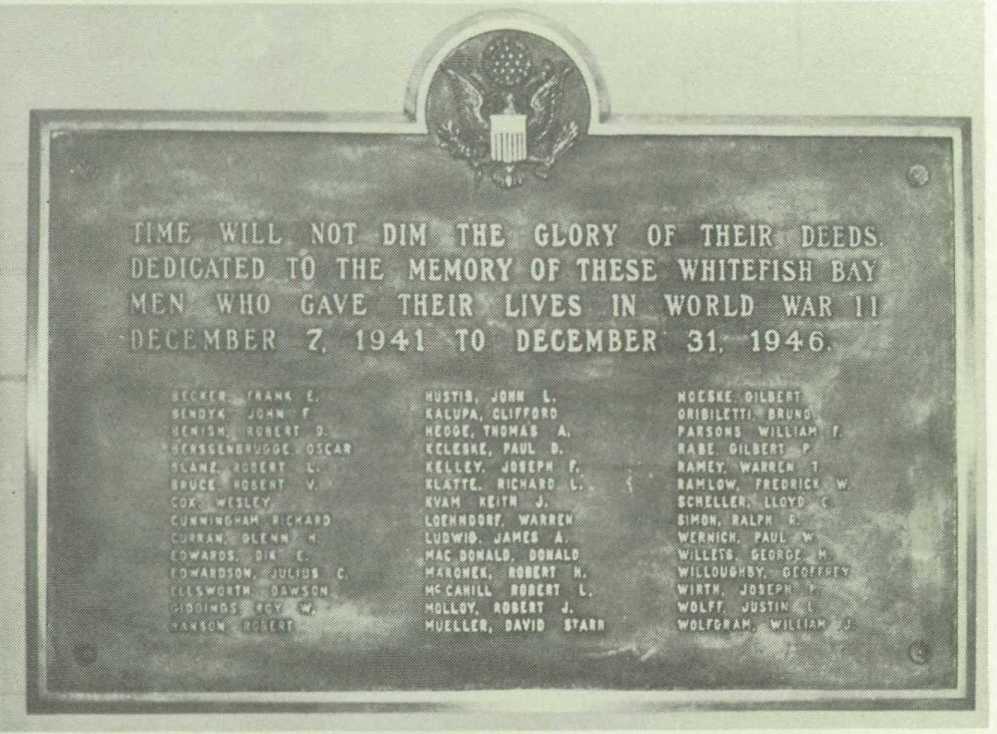 Nancy Van Roo McCahill remarried, had a family and was a long-time teacher in the Wauwatosa public school system.

In 1961 a marker in Bob’s memory was placed at Arlington National Cemetery. 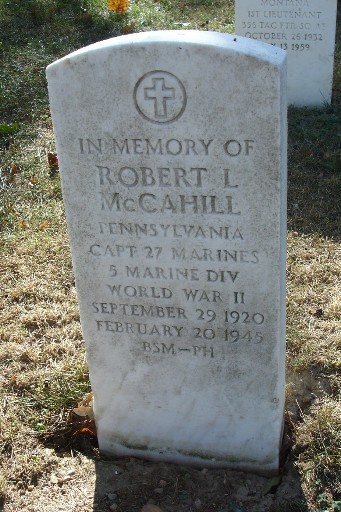 Before the Marquette and Marine Corps days, Bob was an awkward high school kid just like the rest of us, judging by what he wrote as a sophomore in a classmate’s 1936 Tower: