At the State Track Meet nobody cares what you’ve done during the season or during your career.  The only thing that matters is what you do on the day of the State Meet.

Heading into his senior season in 1975, Tom Callahan had put together a solid career in the Pole Vault.  In his first year vaulting, Tom tied what is thought to be the Bay freshmen record at 11-0.  As a sophomore he competed on the Varsity and upped his PR to 12-0.  Then the improvement continued as a junior, with a 5th place finish in the Suburban Indoor before topping out at 13-0 during the outdoor season.

There is nothing in that record that would have put Tom in the conversation as one of the top vaulters in the state heading into 1975.

Tom put together a solid 1975 indoor season, finishing 2nd to Wauwatosa West’s Mike Kornacki in the Suburban Indoor on misses with a jump of 13-0, which put him into the State Honor Roll for the only time all season.

Then the outdoor season was pretty much non-stop improvement.  But other guys around the state were doing the same thing, so Tom was always an inch or two outside of making the weekly Honor Roll.

Tom won the Spartan Invite at Brookfield East with a meet record 13-2 3/4. Then he led the Bay vaulters to the Suburban Relays Pole Vault title with a team total of 36-6:

Then it was off to the Monona Grove Invitational, which at that time was the biggest regular season meet in the state.  The Pole Vault field was top notch, but Tom stood tall with a 13-6 PR good for a T4.

And then the very next day Tom again led the Bay vault team to a win, this time the Highlander Relays at Homestead.  Tom was the top individual and collected a scalp over state Pole Vault leader Jeff Majerus of Homestead.

The next meet was the Suburban Outdoor at West Allis Hale.  The Outdoor had been the Bay track program’s most important regular season meet going back to the early Wangerin days in the 1930’s.  Wauwatosa West had smoked the field at the Suburban Indoor and Suburban Relays, and had a strong, deep team.  Meanwhile, the Bay had finished 5th Indoors and 3rd at the Relays and was considered to be in a pack battling for 2nd with Wauwatosa East, Waukesha South and West Allis Hale.

In an amazing performance from all parts of the team, the Bay knocked off the Trojans for the title 76 1/2 to 71 1/2.  One of many key events was the Pole Vault, where Tom won with a jump of 13-9, while Indoor winner Mike Kornacki of Tosa West finished 5th.  That was the difference in the meet right there.  But the Bay got tons of great performances, some hoped for, some not in their wildest dreams.  Junior Jim Smallins was a double winner in the Hurdles, senior Bill Donovan picked up a 2nd in the 220 and 3rd in the 440, senior Eric Thomas was 2nd in the Discus, sophomore Bob Forrer was 2nd in the High Hurdles and junior Fran Bandettini was 2nd in the Long Jump.

Competing at the Suburban:

Next up was Regionals and Sectionals.  In the Sectionals, Tom again beat state leader Rick Majerus of Homestead, this time on misses, with both jumping 13-9.  As a team, the Bay qualified just 2 athletes for the State Meet, with Jim Smallins also qualifying in both hurdles.

Heading into the State Meet, here was the Honor Roll in the Pole Vault:

Tom was just out of the money at 13-9, but had cleared that height three times in the previous three weeks and had twice beaten Majerus head-to-head.  But he had been beaten by both Wisconsin Rapids guys at Monona Grove.

At the State Meet, a lot of guys cleared 13-6, but then the bar moved to 14-0, a height that not many guys had ever cleared at the State Meet.  It was put up or shut up time.  Just three guys cleared 14-0.  Bob Downs and Randy Fink of Wisconsin Rapids and Tom Callahan of Whitefish Bay.  And only Downs and Callahan had a clean card.  The bar then went to 14-6 and all three remaining vaulters missed all three attempts.  That set up a jump-off between Downs and Callahan, with the bar set at 14-3.  Downs missed, Callahan made and it was over.  Tom Callahan of Whitefish Bay was the State Champion, with not one, but two massive PR’s in the biggest meet of his life.  The great ones do it on the day.

The bar was measured after the winning jump and it actually came out to 14-3 1/4, which gave Tom the Bay school record.

Here is footage of the winning jump.  It was taken by a guy working for Channel 6 in Milwaukee.  Tom’s mother asked if she could get a copy and eventually did.

A very cool thing is that you can see the Bay’s Jim Smallins in the background before and after the jump.  Jim had won the State title in the 120 High Hurdles and was warming up for the start of the 180 Low Hurdles, where he finished 4th.

It’s a near certainty that at some point over the next 45 years, the guy in the orange has needed shoulder surgery.

Here’s a photo from the next day’s Milwaukee Journal showing the winning jump.  It’s one of the best track and field photos I’ve ever seen.

One of the best Pole Vault coaches in the state, Bay Assistant Mike Koerner, with his State Champion.

Improbably, the Bay finished 2nd with just two athletes and picked up a trophy.

The 14-3 1/4 was the 4th best jump in State Meet history at that time and has held up very well over the years.  Especially considering that the poles of that era were like heading down the runway carrying a tree trunk.  In the 25 years from 1966 when the great Bill Oaks of Oshkosh broke Brian Bergemann’s State Record with a jump of 14-2 1/2 through 1990, a jump of 14-0 did or would have won the State Class A Pole Vault 17 times.

Tom then attended Tufts University in Boston where he competed on the track team and ended up with a PR of 15-9.

To this day Tom is active coaching the vault with Get Vertical in the Milwaukee area.  His daughter Rylee was a four-time State qualifier in the Pole Vault and holds the Nicolet school record.

Tom and Rylee at the State Meet in La Crosse. 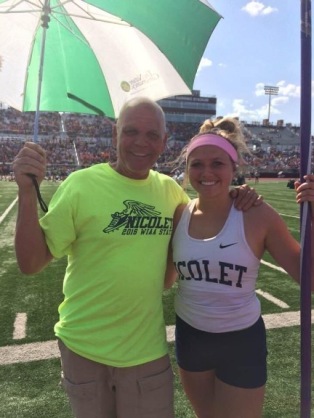