Here are the Bay school records for relay events as they stood in 1967.

Here is the meet where they ran the 44.2 — the Suburban Relays.

Phil Valley, Gene Freedman, Jim Pflugradt, Bob Albrecht.  The 44.2 lasted as the Suburban Relays record for a crazy 23 years, until Shorewood ran 44.0 in 1965.  And prior to 1965, the record was never seriously threatened, with the best time a fine 44.5 run by the Bay in 1962, with most winning times being over 45 seconds.  And, as an aside, the Bay has had decent success with Finland AFS students over the years.

Bob Albrecht was an outstanding athlete.  All-Suburban in football, 21 feet in the Broad Jump, Suburban and State hurdles champion.

Phil Valley was a Suburban and State hurdles champion and an all-class State record holder in the high hurdles at 14.4.

Gene Freedman was a sharp dresser.  That’s per the 1942 Tower and it’s all I got on him.

Other tidbits from the 1942 Tower are that Pflugradt was a straight arrow, Albrecht a ladies’ man and Valley a joker.

So if these guys were all that good, and two of them were State hurdles champions, shouldn’t the Bay have had good hurdles relay times as well?  And by good, I mean really good?

Yes.  And they were off-the-charts outstanding.

Here are the 360 High Hurdle results from the 1942 Suburban Relays. 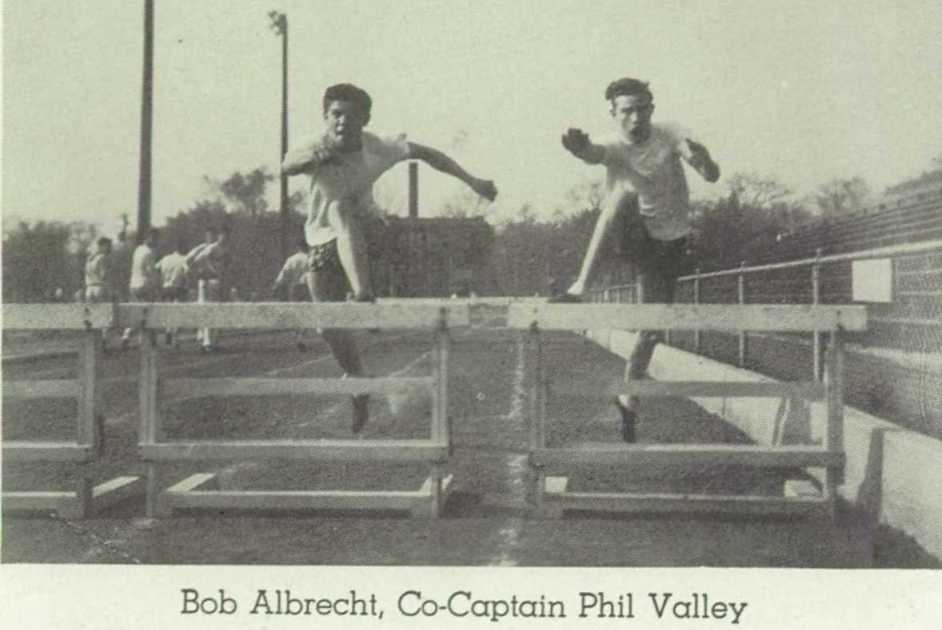 The third member of the hurdles relays teams was Del Bertschy, who was a junior in 1942.  Del was also a very accomplished hurdler, though his specialty seemed to be the low hurdles.  He won the Suburban 200 Low Hurdles in 1943 at Hart Park.

And here are the 378 Low Hurdle results from the 1942 Suburban Relays.

The 378 Low Hurdle record of 43.7 was broken only by the Bay 1947 team, which featured the great Jim Mitchell (overall State record holder in the High Hurdles at 14.3), Jim Englander (one of the Short Lads ), who won the 200 Low Hurdles at the Suburban in 1947 and Jim Bremer, who was a great all-around athlete.  Englander’s winning time at the Suburban was 22.3, which not only would have easily won at State in any division at Camp Randall the week before, but would have broken the State record.  But he didn’t run that event at State.  The low hurdles was run at 200 yards for 10 years (1946-1955) and there were only two winning times at State under 23.0.  Those were a 22.7 and 22.9 run by the same Class A State champion in back-to-back years.

Any race can have a bad time from the officials.  But we’ve got three races here on the same day where outstanding times were run and there is no chance of a timing error occurring in all three.  And there is little chance there could have been a timing error in even one race in a championship meet held at the Bay, where there likely would have been three watches on the winner of each race.  Plus, the runners in these races were highly accomplished throughout their careers in individual events.  Everything passes the smell test.

The conclusion from all of this is that the 1942 440, High Hurdles and Low Hurdles relay teams all ran times that compare favorably with the absolute best the Suburban Conference had to offer through the reminder of Conference history.  These guys were really, really good.

From 1936 to 1957, Bay Assistant Coach Florin Caulkett was in charge of the sprinters, hurdlers and the associated relays.  “Coach” had been a been a sprinter at the University of Wisconsin and the Bay track program was lucky to have him for two decades.  He turned out great, great athletes for all of that era.  Coach retired from coaching along with Chet Wangerin after the 1957 season and was a P.E. teacher at Cumberland until his retirement in 1968.

I don’t have a lot of details on these 1942 relay guys after high school and the stuff below is all I could find.  Something that I’m certain about is that their lives at age 20 were far, far different than mine.

Phil Valley — was injured while serving in the Marines during WWII.  Lived in the Cincinnati area, married Dolores, had four sons and died at age 66 in 1990.

Jim Pflugradt — worked at Schlitz during the summer of ’42 and then served in the Navy.  Married Lillian in Florida in 1949, was living in River Hills, WI during the 1950’s and died in California in 1993 at age 69.

Bob Albrecht — served in WWII, married Constance and died in Connecticut in 1983 at age 58.

Del Bertschy — enlisted in the Army after high school, graduated from Wisconsin with a degree in Marketing in 1950, married Dorothy the same year, had three sons and worked for Caterpillar in Peoria, IL.  In 2009 at age 84, Del kept himself busy by researching Peoria commercial property values, figuring out how much certain businesses were under-assessed and calculating the loss to Peoria taxpayers.  Just the typical retirement project that everybody has when they’re in their 80’s. 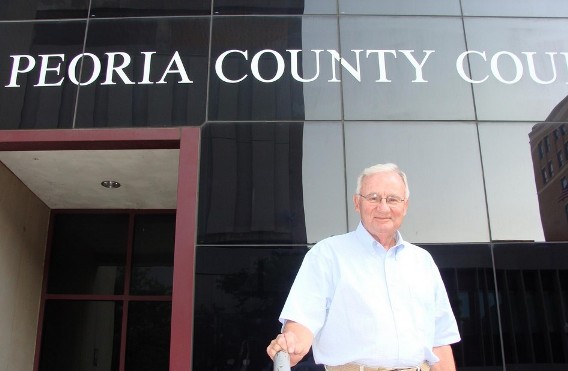